Tehran, Iran – Iran and Qatar have discussed Iran’s nuclear deal with world powers and laid the groundwork for Doha to act as a mediator between Iran and Arab rivals in the region during the first high-level talks in Tehran.
Foreign Minister Sheikh Mohammed bin Abdulrahman Al Thani led a Qatari delegation on Monday that met President Hassan Rouhani and Foreign Minister Mohammad Javad Zarif. 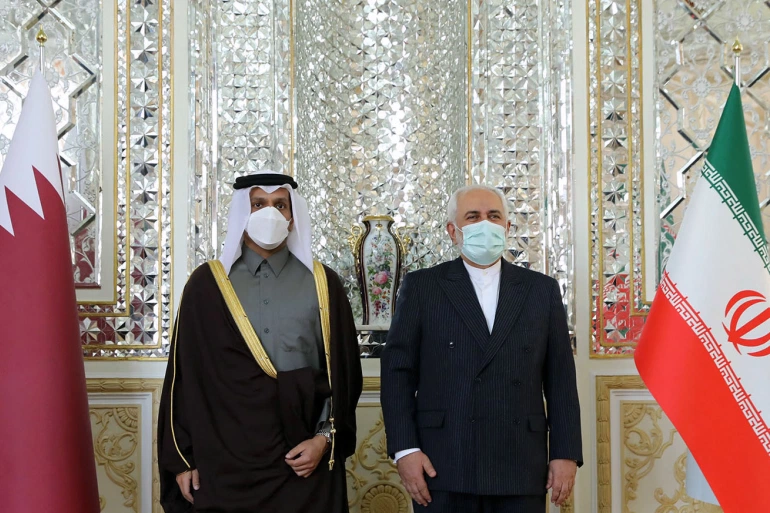 He said the “maximum pressure” campaign of economic sanctions has failed, and the Biden administration – which has so far insisted that Iran returns to its commitments under the deal first for sanctions to be lifted – will have no recourse but to restore the deal.

“As soon as the US lifts its illegal sanctions and returns to law, Iran will immediately return to all its commitments under the deal,” he said.Iran gradually scaled back its commitments a year after Trump left the deal, and has said it will limit international nuclear inspections from February 21 as per a parliamentary law if it deems other parties still do not abide by their commitments.

‘Qatar will spare no efforts’

The Qatari foreign minister continued to advocate for a speedy return of the US to the nuclear deal.

“We hope that with the return of the US to the nuclear deal as soon as possible, challenges and sanctions can be alleviated within the framework of the deal and Qatar will not spare any efforts to make that happen,” Al Thani said.

Qatar has been working to de-escalate tensions in the region by advocating for a return to the nuclear deal for more than a year, something Iran has welcomed.
After several Gulf Cooperation Council (GCC) states, including Iran’s archrival Saudi Arabia, lifted a land, sea and air blockade on Qatar in early January, Qatar said the development will not affect its ties with Iran.

The relationship with Iran was one of the reasons cited for the blockade on Qatar, and one of the initial conditions for the lifting of the blockade was cutting ties with Tehran.In meeting with his Iranian counterpart on Monday, Al Thani reportedly thanked Iran for its support during the blockade. He also said Qatar is ready to play a “key and effective role” in establishing regional dialogue, according to the Iranian Foreign Ministry.

Zarif congratulated Al Thani for the end of the blockade, saying Iran looks forward to stronger ties with Qatar and the region.

After the meeting, the Iranian foreign minister pointed out in a tweet that he has met the United Nations Special Envoy for Yemen Martin Griffiths, Iraqi Foreign Minister Fuad Hossein, and Al Thani while Astana talks will continue with Russia and Turkey on Tuesday.

“Our region is our priority,” he wrote.